Shipping and Returns Policy
Born in South America in the mid-sixteenth century, the so-called "Esgrima Criolla" or Creole Fencing is a combat discipline displayed by the creole gauchos, both in the army, during their independence wars, and in dueling combat. It is a live and current combat art that has been modified throughout centuries, that is, a mixture of techniques that were perfected and made own, from the Andalusians, the Gypsies and the Arabs with their gumías who, mixing with the American aboriginal pampa people, gave birth to the creole, whom time made gaucho. This new race adopted the Creole Fencing as their fighting system, the first original South American Martial Art, showing already as early as 1700 a defined style, that, with the passing of the years, got reflected in the excellent warrior of the pampas, with his own identity and defined and effective techniques. His weapons are knives, and his protection is the "poncho". Among these blades, his signature weapons are the "facón", a knife that was born with only one purpose, to kill and fight, and the "caronero", among others, a long knife of more than 80 cm, which was used mounted on horseback. In this first volume, Jorge Prina, Master of Creole Fencing and Knife Combat instructor, tackles a complete presentation about this Art, explaining in detail the knife Grip, the Guards or Positions, the Distances, the Displacements, the Shots o Cuts, Moulinetes, the Poncho technique, physical conditioning and focusing and "visteo" exercises, as well as the technique with both "facón" and "alfajor". 67 min - Languages included in DVD format: Spanish only
Jorge Prina
DVD/ECRIOLLA1-PAL
0.10 kg 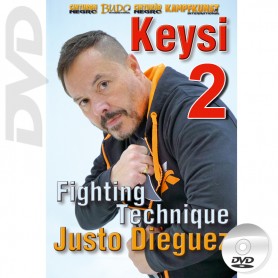